It’s not good to enough these days for copywriters to just sell their product, they have to intrigue, to catch attention, to be memorable and to make their audience smile.

And one marketing platform unlike any other, where copywriters have the unique opportunity to do just that, is the tube. Over 1 billion people travel through a London tube station annually, making this market larger than almost any other travel industry in the UK.

Knowing that copywriters have a fantastic moment to capture the attention of millions of visitors every day, numerous companies, including Transport for London, have taken the challenge. Their copywriting prowess can be seen on escalator walls, inside trains and on service information boards.

Here are a few of our favourite messages that are sure to lift your spirits.

A colourful array of rainbows and powerful statements have appeared in Brixton Station this October. They’re by the late artist David McDiarmid and are meant to bring awareness to issues relating to queer identity and history. Studio Voltaire has worked hard to share the artist’s Rainbow Aphorisms series throughout the Brixton Underground Station. 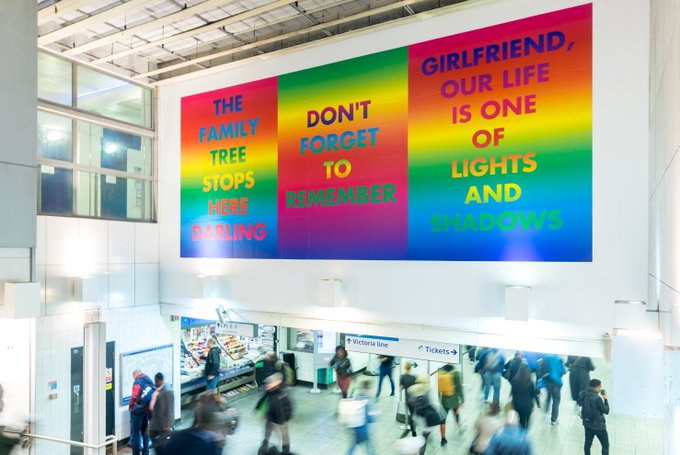 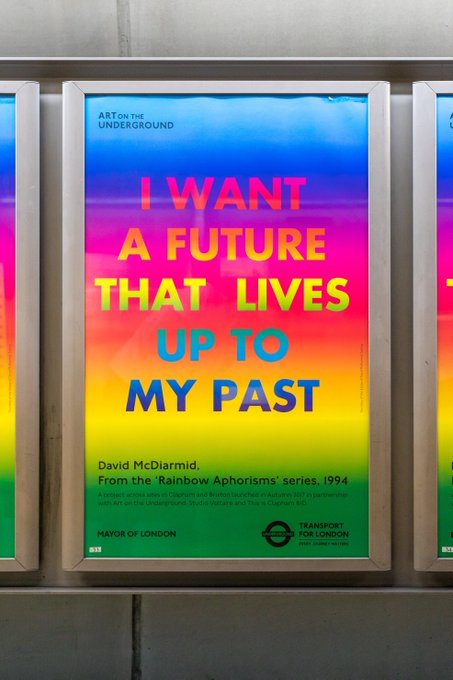 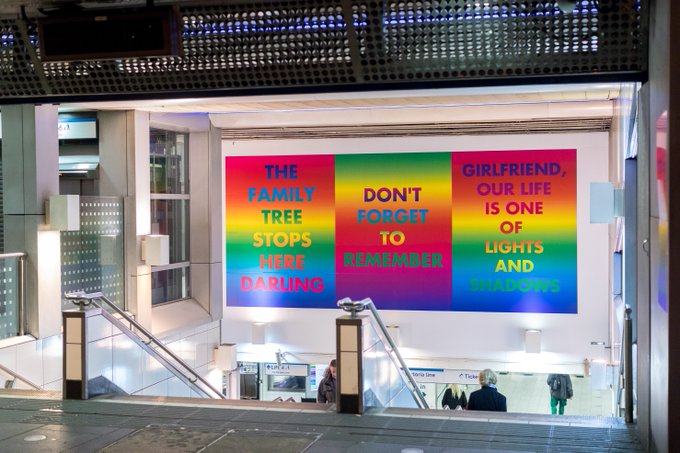 See Pride in London’s other Tweets

The phrases themselves are inspirational and uplifting, and if commuters don’t stop to read the fine print on the boards they will at least leave with a lighter heart and a smile creasing their lips.

The late David McDiarmid stated he wanted a ‘future that lives up to his past’, a relatable idea that will stick with readers as they go about their day. Over the next year more of his work will appear intermittently at various locations across Brixton and Clapham – something to look out for on your next tube journey.

The Canadian athletic apparel retailer is making a big splash in London and much of that is thanks to its tube adverts and copywriting skills. Instead of the generic branding with beautiful women wearing their form-fitting gear, they’ve decided to diversify with a campaign that gets you right in the heartstrings.

Their post, ‘Think of three things you love about someone in your life. Now text them’ doesn’t specifically say anything about their brand. But it does automatically make you think, and if you haven’t already, makes you want to pull out your phone.

LuLulemon has only recently expanded from North America, but it seems its copywriting technique will have commuters googling their brand and all wondering the same thing, what in the world does ‘Lululemon’ mean?

The Oval tube station on Kennington Park Road is no stranger to motivational copywriting. They’ve been featured on the BBC2 documentary ‘The Tube’, thanks to their ‘Thought of the Day’ board. This board has been a daily occurrence for passengers since 2004, and the quotes are known to inspire and bring a smile to commuters as they file past. Not only do they make passengers slow down and take a second glance, but sometimes they also fill another purpose, like Oval tube station’s post on the 7th of May 2015.

Thursday 7th May “Revised ” Thought Of The Day 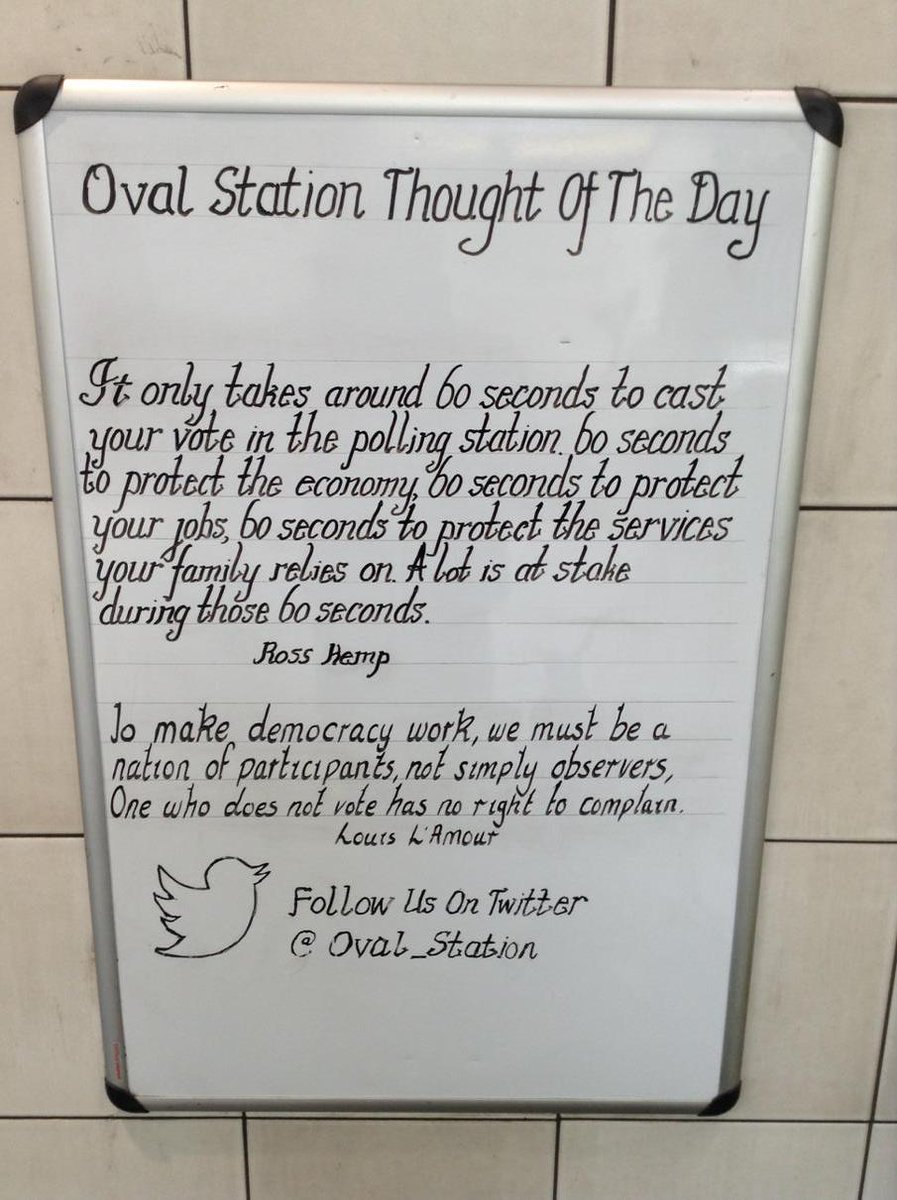 86 people are talking about this

Here they urge their audience to take part in the general election, to cast their ballot and to give their voice to democracy. Their quotes from Ross Kemp and Louis L’Amour were sure to encourage those on the fence about voting, adding diversity to those who voted. It shows that good copywriting spurs action.

Oxford Circus has recently had a revamp for the season 2 premier of Stranger Things on Netflix. Combining the efforts of Netflix UK and Exterion Media UK, a shockingly visual wall has erupted overnight. It shows an Oxford Circus tube station sign eroding in a pumpkin patch, along with Stranger Things’ character Jim Hopper searching through the fog. This sign is located right next to the Bakerloo Line and Victoria Line routes, with the image spilling over onto the tube stop map. 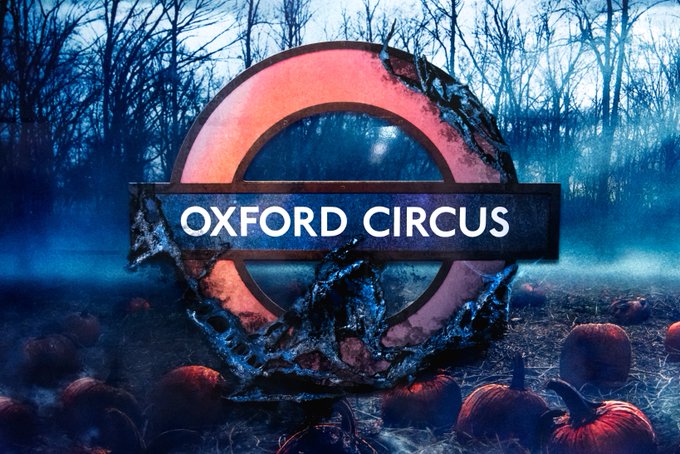 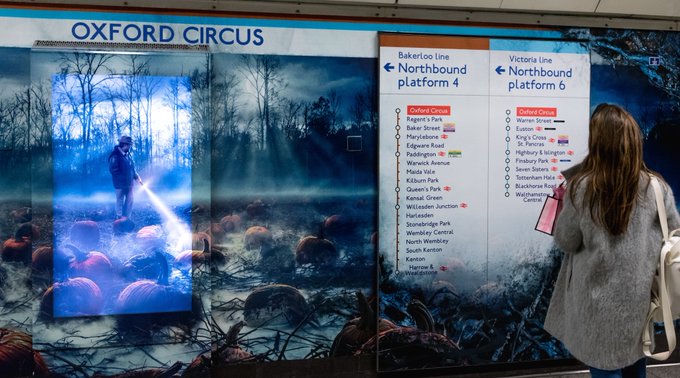 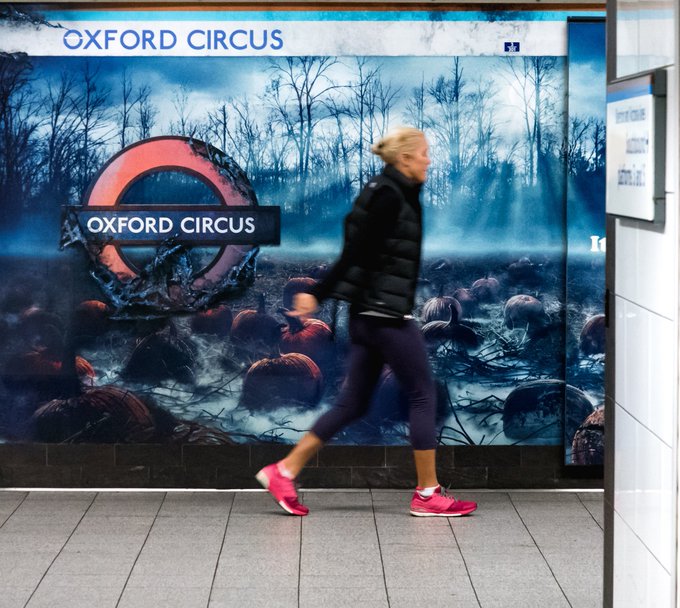 364 people are talking about this

Amazingly enough, this board doesn’t state that it’s an advert for Stranger Things 2, but the cult following of this show means it doesn’t have to, the images are clear. Fans of the show won’t be able to walk by without taking a picture. You may have spotted that this advertisement doesn’t have words, does a copywriter always need to use print? We’ll let you decide. As the phrase goes, an image speaks a thousand words.

In a fast-paced world with deadlines to make and trains to catch, these copywriting ads, campaigns and tube station motivational messages are unique and memorable. They elicit emotion, entice action and allow London commuters to stop thinking about their long list of tasks ahead of them, and to ponder something else, whether humorous or poignant.

It’s about time copywriting was taken to the next level, and we approve.

If you want to make a memorable impression through your content strategy then don’t hesitate to get in touch with one of the team and find out how WooContent can help you today.